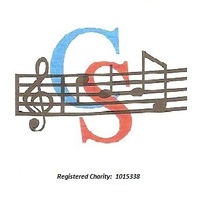 THE CHRISTOPHER SINGERS are a registered charity and were formed in 1991 by John Steel to give concerts, ostensibly to raise money for charitable organisations and institutions.   To date, over £50,000 has been raised, the main beneficiary being the Children's Unit of the Royal Marsden Hospital in Sutton, Surrey.   The group have a varied and wide ranging repertoire and have appeared in many local theatres and halls in their fund raising activities including the Courtyard Theatre, Chipstead, the Barn Theatre, Oxted, Archway Theatre, Horley, The Charles Cryer Theatre, Carshalton and the Epsom Playhouse.   In Millennium year, critically-acclaimed fully-staged performances of Edward German's opera "Merrie England" were given at the Epsom Playhouse.……...The Christopher Singers appeared at The Charles Cryer Theatre in Carshalton until its closure in 2016. From 2017 The Company presented their main shows, now in May, at The Colin Peel Hall, The Elmcroft Community Centre, North Cheam. Performances to date are shown below:​

Love - The Impossible Dream, 11th May, 2019, is a beautiful story of the stages of love brought to life through music and voices. An enchanting journey of great musical numbers of love and romance. “Love is no passing thing….it is forever”.​

On 15th December 2018 Alice...the Panto' by Archie Wilson was presented at The RB Legion Hall, Cheam. Alice finds her White Rabbit and has many adventures in Wonderland together with The Mad Hatter, a very loud Queen of Hearts, a dippy Fairy Godmother and a madcap Duchess. A resounding success.

On 15th September, 2018 The Royal British Legion invited us to perform an Old Time Music Hall. It was a resounding success and a memorable evening
​
​On 12th May, 2018 The Magical, Mysterious Tale of Tumbledown was a huge success at The Elmcroft Community Centre, North Cheam. The story of how Harmony, Rhythm and Melody are brought back to the town which was facing destruction. A magical story full of wonderful show stopping songs and ballads.

​On December 16th, 2017 The Queen of Hearts was presented at The RBL Hall, Cheam. There was some very shady business going on at The Royal Palace. The Crooked Woman who stole the lamb, the pig and the tarts was straightened up, Princess Mary and Tommy Tucker found true love and Caroline, the Cow provided milk shakes for the Royal Celebrations. All lived happily ever after.

A repeat of this show, by public demand, was presented on 15th July at The Royal British Legion Hall, Cheam. Again, a huge success!

​In April 2017, BRITAIN…..A musical celebration took to the stage at The Elmcroft Community Centre, North Cheam. This was a new venue for The Christopher Singers and proved to be very successful. An historical journey, wonderfully woven with music, spanning over 450 years was reduced to 2 hours……..Amazing!

In December 2016 the story of Old King Cole was brought to life by The Christopher Singers, under the splendid direction of Lynda Mitchell. The King becomes grumpy after losing his pipe and the Queen takes on a merry mood under the Demon’s spell. All is put right by Fairy Fantasia. Princess Viola gets her man, Dick, The Prince of Harmonica and everyone lives happily ever after.

In August 2016 The Cryer closed and The Company found a new venue for their 2017 show, at The Elmcroft Community Centre, North Cheam.

In May and July 2016 The Christopher Singers presented All at Sea,  their 25th Anniversary Show.
A story of intrigue and suspense involving double agents, pirates, Femmes Fatales and Nincompoops - oops! no, Ninjas. Woven around the story, written by Kate Puleston, were musical numbers galore - beautifully sung by The Christopher Singers and directed by John Steel, with piano accompaniment by Neil Shrimpton.


Live recordings have been made of all the shows and issued on DVD.

In December 2015  a very funny and entertaining Panto, King Arthur by Paul Reakes, was presented by the Christopher Singers.  This Panto was wonderfully directed by Lynda Mitchell and so popular that an extra Sunday show was added.  A huge success and a show that everybody enjoyed.  As customary, Christmas songs and carols were sung for audience particiaption including The Twelve Days of Christmas, our favourite!!!

In May and July, 2015 The Christopher Singers presented Keep the Home Fires Burning, a tribute, in words and music, to the soldiers of WW1, and the story of two young men, John and Willem, and how their meeting affected their families at home and abroad. The show was full of nostalgic tunes, We'll meet Again, Keep the Home Fires Burning, Me and My Girl, If you were the only Girl in the World to name a few. Not forgetting sing-along-songs Goodbyee-ee, Its along way to Tipperary, Pack up your Troubles, Land of Hope and Glory and many more.

The Pantomime for December, 2014 was Ali Baba (and the Forty thieves), superbly directed by Lynda Mitchell. It was a resounding success with two full houses. This was followed by Christmas Songs and Carols (including the customary Twelve Days of Christmas, with interactive audience participation, when fun was had by all!).

In April, 2014 The Company presented Myths, Legends & Fairytales.  An enchanting mixture of tales of gallantry, magic, dark and sinister doings and fairytales of love and romance.

In 2013 our traditional Pantomime of Dick Whittington and Festive Music was performed to packed houses. People had to be turned away as we could not accommodate them. A lesson here we think – book early to avoid disappointment.

In March and July, 2013 the group presented  ‘ London Calling’,  bringing the music of London Town , from the earliest street cries and tavern dities to the music hall,  Gilbert and Sullivan era and songs of the 1914-18 war.  Following on to the joyous music of the 20s and 30s. The nostalgic songs from the 1939-1945 war years was followed with excerpts from the shows that lifted the spirits after the war. The programme took us through the advent of the calypso songs that changed the face of music in London in the 1960s.  Finally the celebrations of the Queen’s Jubilee and the splendour of the London Olympics was brought alive with two special songs – Our House and the much remembered ‘Sing’.

The Christopher Singers’flair extends very widely – you name it – they will sing it!  They also embrace classical choral music in their repertoire.

Finally, the Christopher Singers firmly believe that singing has a universal appeal and should be encouraged from an early age. They have a talented youth group – The Younger Generation, who, together with local schools in the area, take pride in bringing music and entertainment to a wide audience in the community.

For further information or enquiries about membership please contact johnsteel29@yahoo.co.uk